In this era of cut-throat competition, cover letters can make or break a deal. It is imperative to have the correct format when it comes to cover letters because it needs to be interesting, informative and unique to form a lasting impression.

A well-tailored cover letter perfectly evaluates everything and synchronizes all information. The following is a list of cover letters which are carefully curated for different needs.

This cover letter format is perfect for those who are looking for a good part-time job. While a cover letter cannot win the candidate the job all by itself, it certainly can help in casting the best impression.

A well-worded cover letter will definitely stand the candidate a good chance in bagging the desired job. Those who are seeking full-time jobs must not mislead the human resource recruiter and waste their time by applying for part-time work. 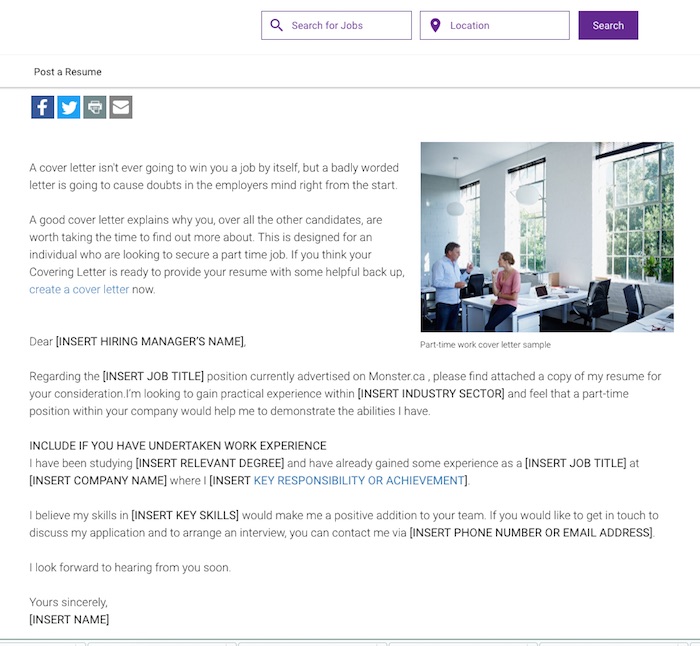 Writing the cover letter of a new graduate is a little tricky. The candidate must take help from samples from across the internet to ensure that they come up with the write cover letter. On the one hand, the candidate has all the necessary qualifications for the job, but on the downside, there is no experience to back the candidate.

A good cover letter can definitely help in casting the right kind of impression on the recruiter. In such a scenario, school and college achievements must be glorified, internships (if any) must be mentioned, and all skills, abilities along with extra-curricular activities must be noted down. 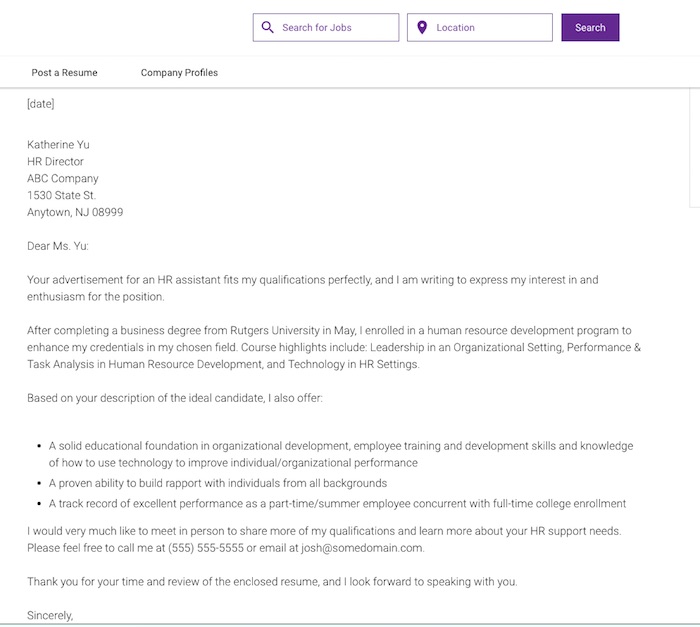 Sample letter for those who have been referred

Those who already have a letter of reference are anyways in a good position when it comes to job opportunities. Nonetheless, a good cover letter backs the reference manifolds. It is always a smart thing to mention the referral in the opening of the cover letter so that the recruiter gets to know about it.

This kind of a letter is much easy to write as compared to other sample letters for jobs and related matters.

Sample letter for a cold call

Writing a cover letter for a cold call is a little too tricky. In such a case scenario the candidate is applying for a job which might not be advertised by the company, or there may not be any vacancy as such. The manager or recruiter needs to set up an unsolicited interview.

In such cases, there are a few pointers to remember. This letter needs to be written really well, and there should be a certain amount of pizzazz to it so that the readers opens the letter and goes through it, after which they might consider offering the job to the candidate concerned. The candidate must mention how much of an asset will they be to the company.

Sample letter for a career change

In this letter, the candidate needs to showcase their desire to move to a new career and how they are passionate about the particular job. The candidate must research on the position they are applying for and then apply accordingly.

When a person is shifting careers, it goes without saying that they are short on experience on the newer field. The candidate must put forward their enthusiasm to join the new job and how they will put their 100 per cent dedication into it. A good cover letter will showcase the value of the candidate in the views of a future employer. 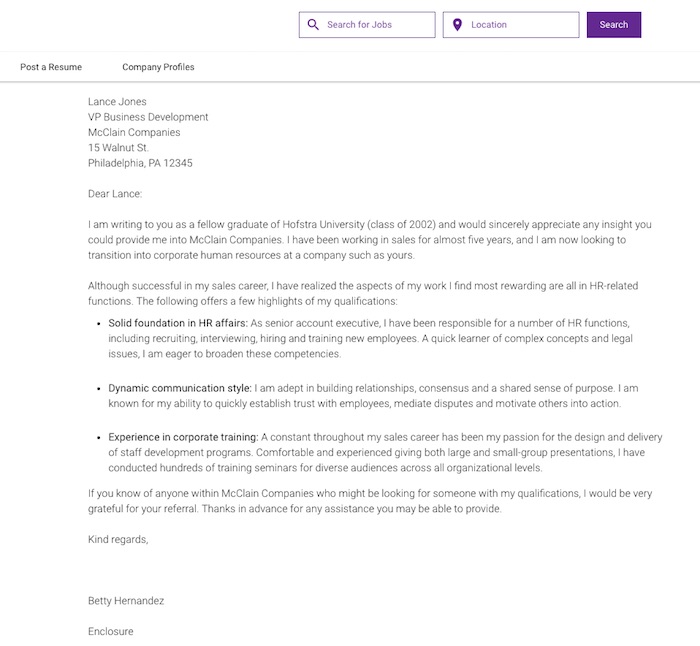 Sample for broadcast letter for a recruiter

In such a case, the candidate needs to understand that there is no such difference between a hiring manager and recruiter. A well-tailored cover letter really helps in such a scenario. Checking out a good sample and chalking out the cover letter on the same lines can really help the candidate. A well-worded letter makes a much better impression than a general letter. 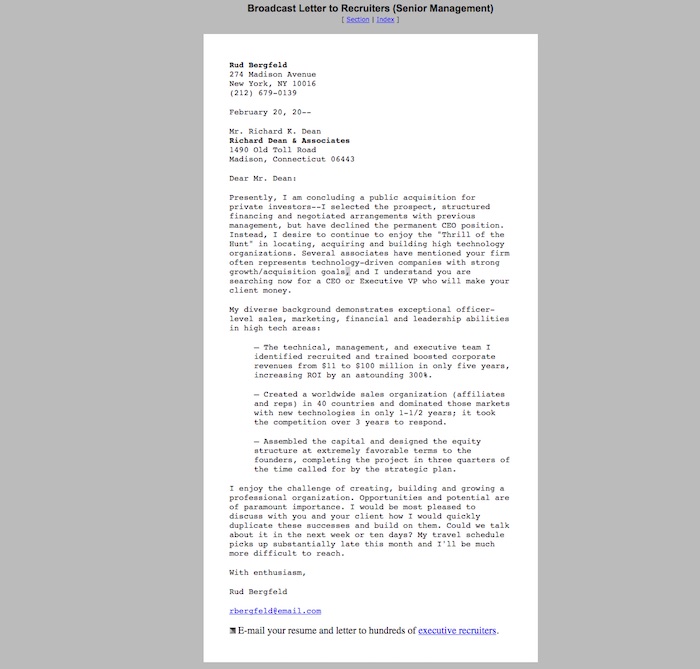 Sample for e-mail submission of resume

There are a number of companies which ask their candidates to e-mail their resumes. This does not mean the candidate is supposed to send a bland e-mail which won’t attract attention. Not following the right steps will lead to zero success. The subject line is very important and so is being concise. Forming the cover letter based on a good sample can help the candidate in getting hold of the right job. 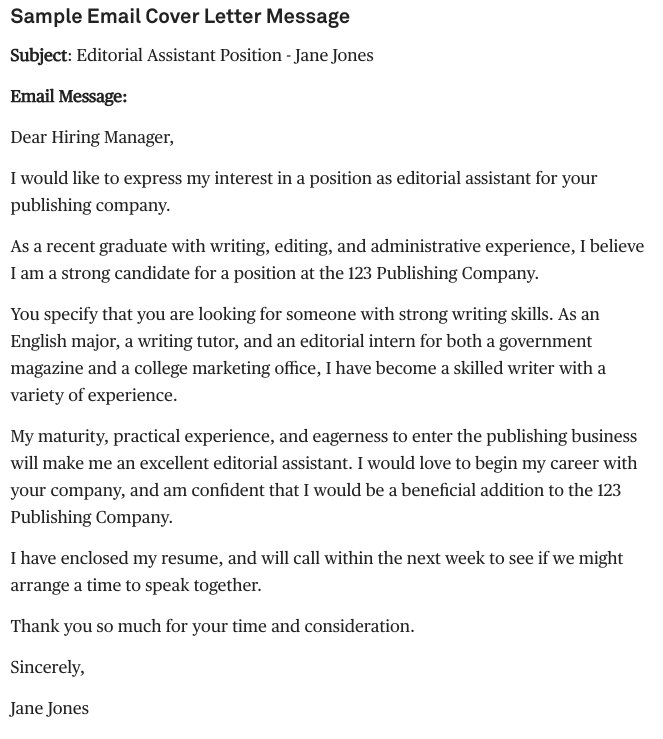 Cover letter to respond to an advertisement

The first line of this kind of cover letter distinguishes it from other letters. The first line has the phrase “this is in response to…” the remaining letter is much like any other job cover letter, but that too must be well articulated.

Sending one response a week to classified advertisement really helps the candidate to sort out the various opportunities and figure out which job do they wish to join. Going through a good sample and creating the letter accordingly is the smart thing to do.

This is much like writing a cover letter for a job opening. In both cases, the candidates must glorify their past achievements and mention their college degrees and percentage. They must also list skills, abilities and the extracurricular activities.

Though writing about personal achievements, it is good; it is imperative to mention how the candidate will be a major asset to the company. One must not mention how the internship will help them, but rather point out how they will benefit the company, and help it reach newer heights. The trick is to add value to the letter that is the most imperative step. 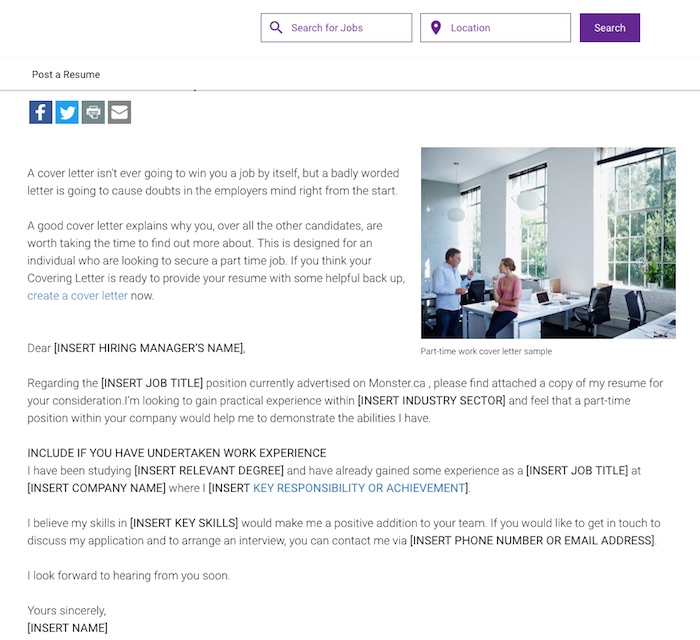 The biggest mistake people make while creating this format of sample letter is to brag. The trick is to keep it concise and clear while writing all accomplishments on one page. Do not elaborate on everything like an encyclopedia.

One must mention why they chose the particular field of study rather than throwing light on the material they have used in the study. The point is to be specific and articulately mention one’s intentions. 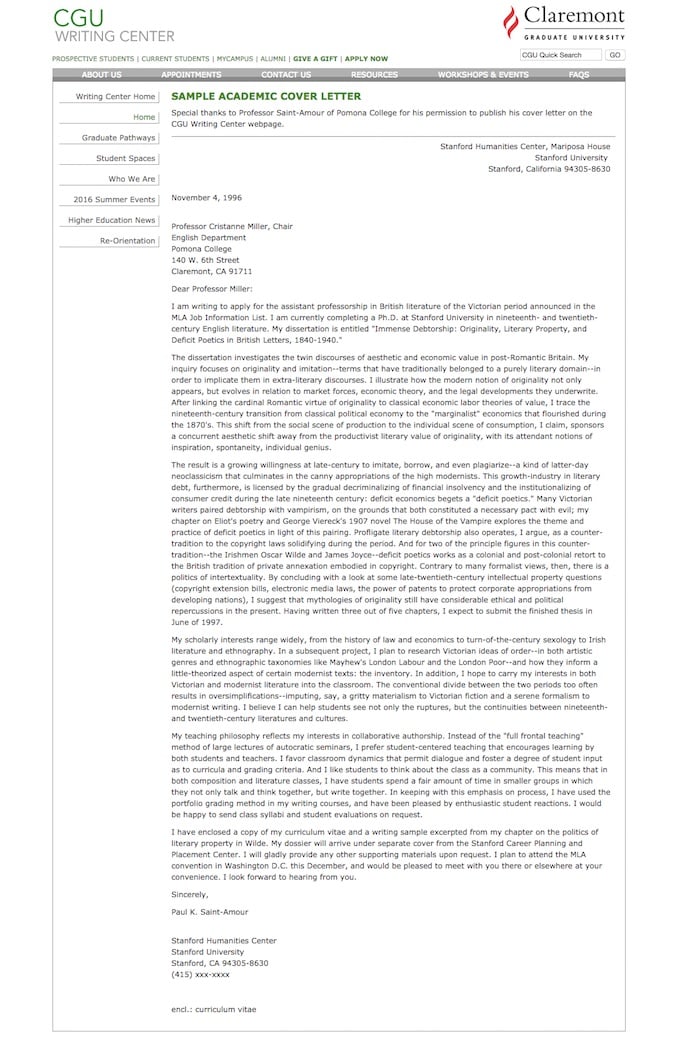 So, there it is, the sample cover letters for a plethora of fields. Writing cover letters is an art not everyone possesses, so every once in a while it is a smart thing to go through samples on the internet and create a letter on those lines. This makes the letter very crisp, accurate and to-the-point. The key is to grab the attention of the reader.

Templ.io Hosting Discount: Get 10% OFF (Exclusive)